PLANET WDAP-C1800AX 1800Mbps Dual Band 802.11ax Wireless AP, supporting MU-MIMO, OFDMA, Seamless Roaming, Beamforming and BSS Coloring technology, provides a maximum wireless speed of 1200Mbps in the 5GHz band and 600Mbps in the 2.4GHz band. The maximum number of client users is up to 150, ensuring more secure and robust connectivity with the adoption of Wi-Fi 6 technology.

The WDAP-C1800AX can be installed in public areas such as hotspots, airports and conferences as OFDMA, a multi-user version of OFDM, enables the concurrent AP to communicate (uplink and downlink) with multiple clients by assigning subsets of subcarriers called resource units (RUs) to the individual clients. With MU-MIMO and Seamless Roaming technologies, it provides a better Wi-Fi user experience, reducing the likelihood of users turning off Wi-Fi and putting more load on the cellular network. Beamforming is to improve your Wi-Fi signal when you are far away from your router. The BSS color is a numerical identifier of the BSS. 802.11ax radios are able to differentiate between BSSs using BSS color identifier when other radios transmit on the same channel.

These technologies also can solve Wi-Fi congestion issues in open work spaces and conference rooms. The WDAP-C1800AX can offer more powerful throughput coverage of up to 150 client users.

Beamforming is to improve your Wi-Fi signal when you are far away from your router. When you use beamforming, Wi-Fi beamforming narrows the focus of that router signal, sending it directly to your devices in a straight line, thus minimizing surrounding signal interference and increasing the strength of the signal that ultimately bring you the following benefits: 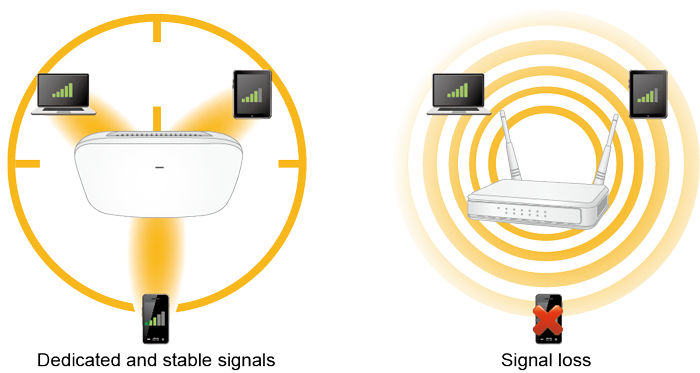 The BSS color is a numerical identifier of the BSS. 802.11ax radios are able to differentiate between BSSs using BSS color identifier when other radios transmit on the same channel. If the color is the same, this is considered to be an intra-BSS frame transmission. In other words, the transmitting radio belongs to the same BSS as the receiver. If the detected frame has a different BSS color from its own, then the STA considers that frame as an inter-BSS frame from an overlapping BSS. 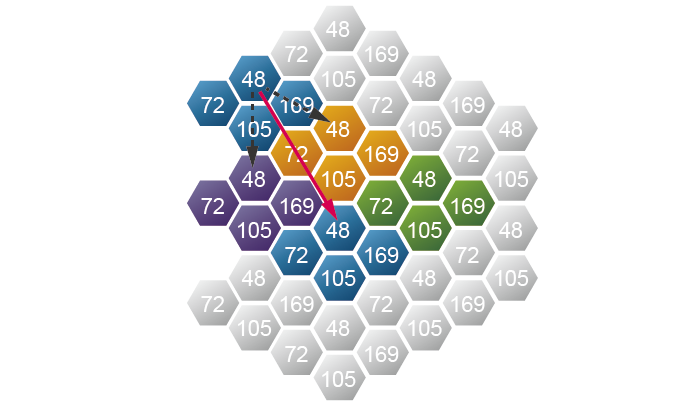 WPA3 Next Generation Security for Your WLAN Solution

WPA3 is the next generation Wi-Fi security technology that provides the most advanced security protocol to the market. WPA3 makes your connection more secure by preventing hackers from easily cracking your password no matter how simplified the password is. WPA3 can also provide more reliable password-based authentication, so it can better protect the security of individual users.

The WDAP-C1800AX supports WPA/WPA2/WPA3 wireless encryptions, and also supports the WPA2 Enterprise, WPA/WPA2 Enterprise, which can effectively prevent eavesdropping by unauthorized users or bandwidth occupied by unauthenticated wireless access. Furthermore, any users are granted or denied access to the wireless LAN network based on the ACL (Access Control List) that the administrator pre-established.

The WDAP-C1800AX supports the simplified usage modes of AP, Gateway and Repeater, through which they provide more flexibility for users when wireless network is established. Compared with general wireless access points, the WDAP-C1800AX offers more powerful and flexible capability for wireless clients.

Ceiling-mount Design for Your Environment

The brand-new GUI configuration wizard helps the system administrator easily set up the WDAP-C1800AX step by step. Besides, the built-in Wi-Fi analyzer provides real-time channel utilization to prevent channel overlapping to assure greater performance. With the automatic transmission power mechanism, distance control and scheduling reboot setting, the WDAP-C1800AX is easy for the administrator to deploy and manage without on-site maintenance. Moreover, you can use PLANET NMS-500 or NMS-1000V AP control function to deliver wireless profiles to multiple APs simultaneously, thus making the central management simple.