To facilitate 30W PoE power network applications with Gigabit speed transmission, the GSW-1820HP is equipped with 16 10/100/1000BASE-T Gigabit Ethernet ports and 2 1000BASE-X SFP interfaces with the inner power system. With a total of 240 watts of PoE budget, it features high-performance Gigabit IEEE 802.3af PoE (up to 15.4W) and IEEE 802.3at PoE+ (up to 30W) capabilities on all ports.

By offering reliable switching technology and advanced networking features, the GSW-1820HP optimizes the installation and power management of network devices such as wireless access points, VoIP phones, and security cameras. It also eliminates time and cost of deployment by integrating power and data switching into one unit and freeing network devices from restrictions of power outlet locations and the additional AC wiring.

The GSW-1820HP brings an ideal secure surveillance system at a lower total cost. The GSW-1820HP provides 16 10/100/1000Mbps 802.3at PoE+ ports able to feed sufficient PoE power for 16 IEEE 802.3af/IEEE 802.3at PoE+ IP cameras at the same time. It is also able to connect with one 16-channel NVR or two 8-channel NVRs, uplinked to backbone switch and the monitoring center. With such high-performance switch architecture, the recorded video files from the PoE IP cameras can be saved to the NVR system where the administrator can control and monitor the surveillance images in both the local LAN and remote sites. 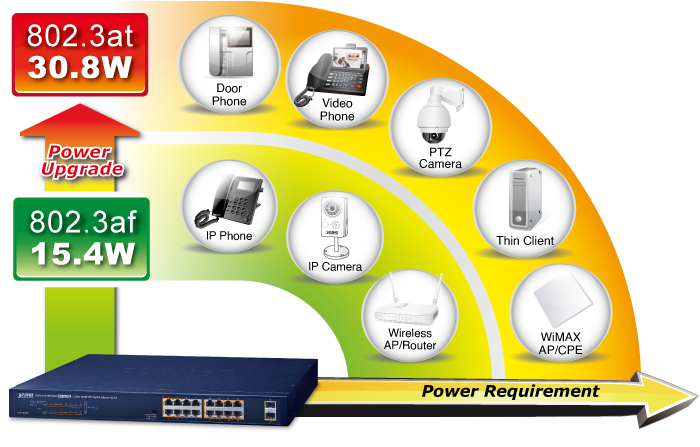 With this brand-new feature, the GSW-1820HP provides an additional solution for 802.3at PoE+ distance extension, thus saving the cost of Ethernet cable installation.

The Idle mode Link Down power savings of the GSW-1820HP complies with IEEE 802.3az Energy Efficient Ethernet (EEE) standard to automatically lower power for a given port when it is not linked. The Intelligent Scales Power technology actively determines the appropriate power level based on the cable length. When connecting to the GSW-1820HP with Ethernet cable shorter than 20m, a device can obtain maximum power savings because the GSW-1820HP would automatically detect the Ethernet cable length and reduce power usage. The connected device can substantially reduce the overall power consumption, which makes a significant contribution to energy savings.

The two mini-GBIC slots built in the GSW-1820HP are compatible with the 1000BASE-SX/LX SFP (Small Form-factor Pluggable) fiber transceiver, uplinked to backbone switch and monitoring center in long distance. The distance can be extended from 550 meters (multi-mode fiber) to 10/20/30/40/50/60/70/120 kilometers (single-mode fiber or WDM fiber). They are well suited for applications within the enterprise data centers and distributions.